Stories from the Road

CoFED's Field Organizer, Anna Isaacs, shares stories from the road as she visits students and youth cooperators in California. 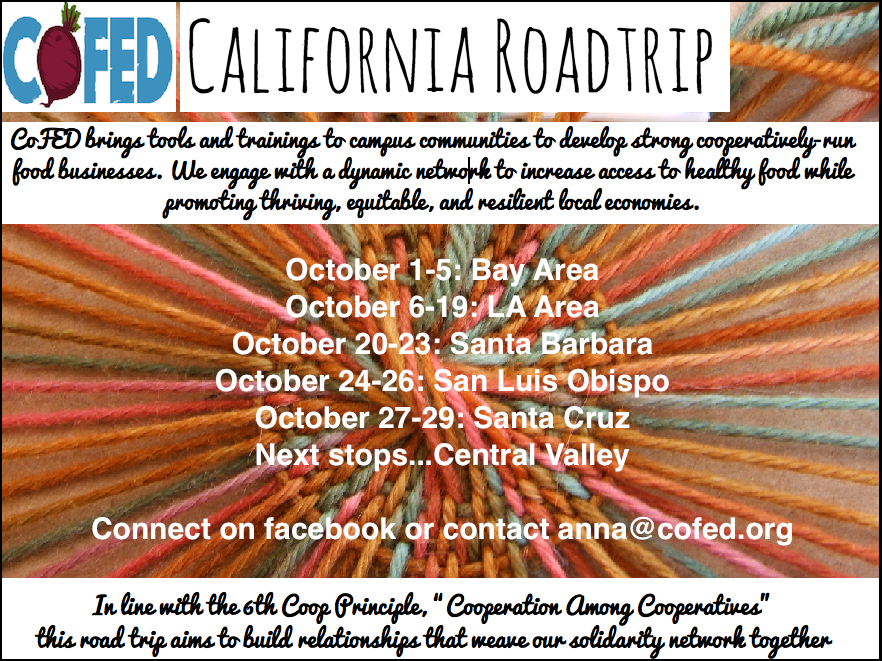 Road Trip Entry #1: Do you believe in magic? What led up to this.

As magic usually has it, it feels as if “something” has been conspiring my fate. A series of events has been set off, some of which could be interpreted as tragic. But upon listening more closely, I was able to see a reason to their development, all of which had part in leading up to this roadtrip.

Let us start this story in March of 2014. I was working in CoFED as the Programming Coordinator, supporting and directing the Regional Organizers on the ground as they did their work. The organization was in the middle of Strategic Planning. In this process the workers were requesting that the organization consider planning for a more democratic workplace, better compensation for people doing the “groundwork”, and serious constituent leadership and engagement in CoFED’s national structure. As the contracts with the Regional Organizers came to a close, our Executive Director announced that we were going to hire full-time field staff that were paid living wages with benefits. These people were going to sit at the same table as administrative staff and their input “from the ground” was going to be listened to and synthesized into whatever proposal was at hand. And finally, it was at least promised that a plan for serious constituent leadership would be hashed out in the following 6 months. With many workers’ contracts coming to a close and a hopeful scheme on the horizon, we packed up our google docs and closed down our email, and some of us applied for the new positions, hoping this new architecture the best.

Around this time, I got in a car crash. Upon seeing the truck, my neighbors were surprised to find out that I had only scratched my pinky. My Toyota Pickup was totaled. This turn of fate seemed ruinous at the time - I was loosing my job and my car. But the universe had a plan: I had been working for CoFED for two and a half years, and it knew that I needed a break as bad as CoFED needed this restructure. The insurance company awarded me just the right amount of money to have an incredible summer adventure hitching through the Eastern Oregon desert while I didn’t have a job, and also, just enough money to buy another car (this time a Ford station wagon by the name of Marsha) to drive to California when my phone rang and the voice said that I was one of CoFED’s new Field Staff!

Before this “summer break”, I wasn’t planning on moving away from Olympia, Washington, but upon returning from the drylands east of the Cascades, I knew I couldn’t survive an eighth winter of rain, mildew, and darkness. In the same week that I learned I was going to be working in CoFED’s new architecture, magical circumstances pulled me down to a little beach town by the name of Bolinas where I fulfilled my first month’s (September to be exact) work and the organization settled into the academic year. I tried to stay in Bolinas, but it wouldn’t have me. Every attempt I made to find a place for October fell through. At the beginning of July, I had written down in my journal that I wanted to spend the fall exploring Southern California. That intention must have been a powerful one because my inability to find a roof over my head was beginning to make the idea of once again packing up Marsha and heading south more and more attractive. In CoFED, it was becoming clear I needed to meet students, mentors, and allies living across the West Coast face-to-face. And in my personal realm, every friend, acquaintance, and extended family member I reached out to warmly offered their home as my home too. An outline of a road trip was beginning to form in the pages of my journal, with dates and names of people and places sprawled out in excited pen ink.

First day on the road

I’m driving into San Francisco and I crest a steep street to a stop sign. I laugh to myself thinking “Gosh I’m glad I’m not driving the stick shift truck anymore.” Events sure align in funny ways sometimes. I’m headed to Megan Meo’s house. Megan worked in Mixed Nuts, the student-run grocery coop at Hampshire college. She was one of the first Regional Organizers for CoFED in it’s infant years and a part of Cooperative Youth Council’s first group of youth “Crashers”. She went on to found the organization Co-Cycle, which took young people on a cross-country bike tour to learn about coops as well as raise awareness about coops. For all of these reasons, we have known each other and worked with each other over the past few years. But we have never met outside of a google hangout or skype call; This will be the first time we see each other face-to-face.

I find a parking spot near her house to leave Marsha, and notice that my front bike tire has a flat. Bummer, I think. I walk up to the house, and someone calls out from the garage “Are you Anna?” “Yes! I must’uv made it to the right place then!” Megan’s roommate, Sarah Roberts, greets me, taking a break from organizing her bike repair station. I quickly learn that Sarah is a bike mechanic in a worker-owned shop, and has extra bike tubes to replace my flat. As I fumble with replacing the tube, I have ample time to ask her about who she is. Sarah went to one of CoFED’s first convergences on the East Coast as a representative of Co-Cycle. She went on to be a summer intern with the US Federation of Worker Cooperatives, where she translated their Worker Coop Toolbox into Spanish. She’s now working towards being a worker-owner at Box Dog Bikes in the San Francisco mission.

I feel inspired to be around such amazing people. Like the spokes of a bicycle, I’m seeing how individual people are cooperating to build something greater than the sum of their parts. Between CoFED’s new staffing structure, Marsha the station wagon car-house, and this CoFED road trip, I’m also feeling that perhaps everything that led to this was meant to be.