Weaving through the back roads of Alabama, I am reminded of a problem plaguing our country: where there were once local business there are now national chains, and perhaps more importantly they are businesses that extract wealth.

Winding around the curves we find the entrance to the Federation of Southern Cooperatives Research and Training Facility and Forestry Center (if you live in the south you can get a membership for only $25). Down the dirt road, and through the woods we arrive at a happy compound of 1 story dorm buildings and a community center.

There is so much to bring me joy in this space, the conference's core constituents are Southern, Low-Income, Folks of Color. These we're definitely the people there, people with histories of creative resistance and who know that what works one place doesn't work everywhere. I was grateful and humbled to consider myself a Southern Person of Color in that space, even if my history was not theirs.

Wendell Paris, who has been involved with Federation for Decades told the history of the movement as part of opening. This is a history of Cooperatives that is not out of hippie Americana, or a concern for organic and exotic herbs and bulk grains. Rather, this was a history that came out of reconstruction in the black belt of the United States. Of folks coming together and starting cooperatives to strengthen black land ownership in the south, to access processing facilities controlled by whites bearing much resentment. The Federation came into being in 1961 to continue that legacy of communities refusing to let the economic control of others determine their destiny, to resist through creation. And holding to the tenant that "social revolution always precedes political revolution" as Mr. Paris put it so nicely. What was once a federation of entirely producer coops is perhaps now more crucial to the widespread cooperative movement, while many big agricultural coops are seemingly moving away from the social imperatives of cooperation, and towards a cold financial logic.

It felt like the conference was really trying to bring so many people together. Especially noted was the Spanish interpretation, and the interpreters with their cheat sheets of cooperative terms in Spanish, and their stories of how they have to explain southern colloquialisms cross-culturally (I think I remember something about boiling a raccoon or some such?)

The rest of the conference filled me with so much energy, the cooperative movement felt so strong, so much bigger than economics, but about people and their communities, their bodies and their lives. It was a amazing to meet so many folks from all around the South, and to see sooo sooo many familiar and new faces from North Carolina specifically (we were representing pretty strongly). It was great to meet folks connected with Organizations I have come to know through this work, to put faces to names with groups like the Working World, the US Federation of Worker Cooperatives, CoopTexas, and the Highlander Center.

I learned a great recipe for kool-aid pie (4 ingredients! email me for the secrets!). I stayed up late with some folks from New Orleans and the C4 Tech and Design Cooperative and played an awesome game involving voting, government overthrow and secret undercover agent provocateurs (again email for the name of the game!). Got into some great debate about Consensus and Parliamentary Rules.

I felt cradled and enlivened by the movement. Committed to building this economy, finding ways to inspire my peers and those more youthful towards creating this new economy. To build beyond our campus and have our liberation bound up with all who struggle with finding or holding dignified work, or healthful food for their bellies and souls.

Running through the rain throwing a football, and being connected to the land that is ours, that came from the cooperative movement for the cooperative movement, I thought back to my Greenleaf days. A newspaper clipping above the door of our cafe said "this is our church" and that is what the federation is. As we were saying goodbyes and debriefing, a woman stood up and spoke to how beautiful the weekend was, and how much hope and action was in the room. She said "I'm going to try not to cry, but its Sunday morning and I'm usually crying in church about this time." She couldn't hold back, and neither could many of the rest of us, smiling widely, or sitting with thumping hearts so full.

I am proud to be a Southerner, to be a Cooperator, and to be a part of building this future, I hope y'all will join us, 'cause there's a lot of work to do. 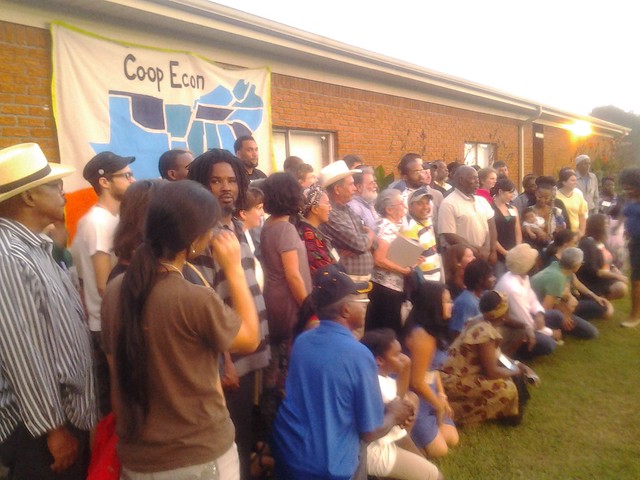