Without a doubt, CoFED's Racial Justice Fellows represent not only the future of our community but also the future of the cooperative movement.

This year's Fellows, chosen from a competitive pool of 45 applicants across the US, embody the vision, values and spirit of our Racial Justice Fellowship, the only Fellowship there is for young people of color to deepen their leadership for racial justice and community-ownership in the food system. They exist and create in ways that only they can, radical acts in a world where simply being oneself is a dangerous project. And with the deep courage to bring communities together for collective liberation, they infinitely expand the possibilities for a safe, sustainable, and socially just world.

Dorian Blue (they/them) has worked as an ally in the food justice movement and a co-owner of the Maryland Food Collective since June 2015. During their time at the Maryland Food Collective, they have studied the power of food co-ops and collective power in communities. As a Racial Justice Fellow, Dorian Blue is cultivating a documentary titled “Through Word of Mouth,” which will integrate community interviews and collective narratives into a future resource for cooperatives, collectives, and radical start-ups. In response to the growing fascism and aggressive racism permeating social spaces, Dorian Blue hopes to unite fellow cooperative leaders and young activists in the fight for racial justice. Feel free to reach out to them at [email protected]

Dominique (he/his, they/them) describes themselves as an ethnically eclectic queer from Compton, whose first and last love is food. But as someone who grew up food unstable, it has also been one of the largest stressors in life. They have spent their life searching for ways to live that intrinsically connect to the ways they want to eat: communal, cultural, loving and sustainable. Dominique recently graduated from Oberlin College and moved to Baltimore, Maryland to work at Red Emma's Bookstore Coffeehouse, a worker-owned cooperative. After learning and building with that community, they moved to Everyman Theatre, where they work as a Development Assistant, helping to bring relevant, accessible and incredible theatre to communities historically denied access to the art form. For the Fellowship, they are conducting a 6-week urban food justice intensive, aimed specifically at queer people of color. The intensive will encompass a multitude of skill shares, workshops, field trips and discussions, lead by local activists, healers, farmers and teachers. Feel free to reach out to them at [email protected] 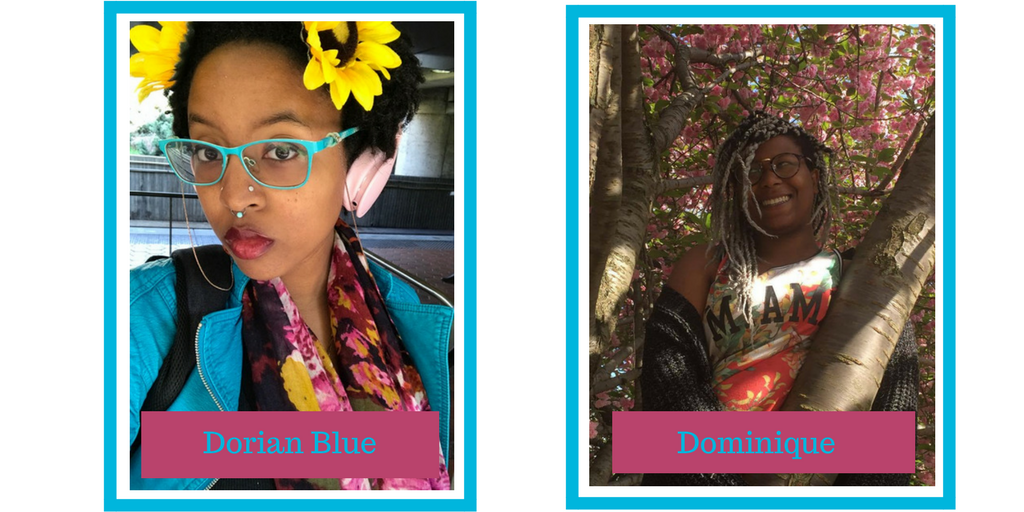 We asked Dorian Blue and Dominique a few questions about inspiration and social justice, and they asked each other a question of their own. Check out their powerful responses below:

Q: Which movements inspire you the most?

I’m motivated daily by the movement for LGBT Rights, but I’m most inspired by the Stonewall Riots that were the beginning of that movement. I’ve been considering the power in the legacy passed down from the Black trans women who fought for transgender rights, and to end the oppression of the LGBT community. In the 1960s, members of the LGBT community were engaged in a constant fight for the normalization of their identities. Police frequently raided gay bars, invaded the safe space that community members had set up in these LGBT spaces, and targeted LGBT members for arrest and assault. The Stonewall Riots had their place in the LGBT Rights movement, as other rebellions have had their place in movements before ours. When I think about the Stonewall Riots, the LGBT Rights Movement that was intertwined with those riots, the Black Power Movement, and the Black Arts Movement that was a response to the Black Power Movement, I consider the ways in which our own movement can create a lasting change for our nation and for our communities, the ways that we can engage art and activism in a resounding call-and-response, and the most effective ways that we can fight for racial and economic justice today.

Dominique: I generally find that I gravitate more towards movements that are quite intersectional; the multiplicities of my identities (queer, Black, non-binary, etc) are rarely cohesively included in any movement, so the ones that do so stand out. The occasions that allow me to put my entire self on display are the movements that I lend my energy to, and those have been primarily Black Lives Matter and the current fight for Indigenous rights and water sovereignty. As two racial groups with a very complex history with themselves and each other, I have seen all the ways that space is being given to queer folks embodying a number of different identities, including two-spirit and non-binary folks. I’ve also seen the ways that activism is being made more accessible to disabled and neuroatypical folks, as well as the honor and respect with which these movements endeavor to treat both elders and youth. It is so hard to define a group of folks to fight for; that’s not how oppression works. However, the willingness to bring in and envelop all the folks on the fringes of their own people; the folks who have felt forgotten by movements past; this willingness is what inspires me.

Q: Who is someone who has impacted your approach to leadership?

Dominique: My Auntie Gina has probably had the biggest impact on the ways I endeavor to lead. As an elementary school teacher, no one knows the issues of corralling a group quite like her. Folks don’t perform well unless they are personally and specifically engaged, and she is an expert in tailoring her engagement technique to each and every one of her students. In that same way, I as a leader have learned how to revamp, reinterpret and relay my goals in a myriad of ways to showcase their relevancy to all of my collaborators, not just the most like-minded of them. I want to lead folks who are enthusiastically participating in this movement; the best way to do that is to show people exactly how they, specifically, are benefitted by/connected to the movement and the work being done.

Dorian Blue: My friend and fellow organizer, Jim Nolan, has shown me a lot about how to lead through his facilitation in collective spaces, quick thinking in organizing meetings, and a constant action towards creating new connections and new change. In my time organizing with him in activist spaces, I’ve learned that leadership is often about facilitating community, rather than demanding or directing. While working alongside him in collective spaces, I have found that leadership means stepping back and letting other people speak, nodding as you listen, and then prompting a discussion that leads to the discovery of an equitable solution. While partnering with Jim, I have learned the difference between order and bureaucracy, and that owning power does not equate to a right to dictatorship.

Q: What are your superpowers?

Dorian Blue: In my free time, I create erasure poetry, which is poetry made from words that are already present, whether it be on a page in a book or from any other source. As an art form, it inspires me to get creative about where I see new stories, and how I can piece them together. When working with histories and narratives as a researcher and as an organizer, finding meaning in those narratives requires a respect for the linearity and original meaning within those stories. However, as an erasure poet, erasure and augmentation of the text functions as a creative way to subvert the power imbued in normative texts.

I also like to think about erasure poetry in terms of how we find and build poetry (and other forms of art) from the narratives and histories in our communities. Through we learn the histories of countries and wars from the bias of schoolbooks, we learn about our family’s lineage and history from oral stories and anecdotes. As a person of color with a large extended family, I also know from experience how difficult it is to find stories about histories that have been lost in time, emigration, and language. In our families, and in our neighborhoods, how do we build new understanding from our discarded histories? I like to think that I have a superpower in finding new stories inside of old ones.

Dominique: Superpowers include a near-endless abundance of empathy and a plethora of scathing comments to deploy, both in my everyday life and in the movements I am a part of. Combined, they make me a pretty powerful support person; my abilities allow me provide comfort, sympathy and an actively listening ear, without cutting folks too much slack for the problematic things they engage in. Providing both criticism and comfort is extremely difficult, and often leads to folks either resenting folks for their candor or dismissing criticisms due to their emotional nature. However, a healthy dose of pragmatism, approachability and straight-up directness allows me to circumnavigate both of those pitfalls, and engage with folks on a level that most cannot.

Dominique asked Dorian Blue, "What food reminds you of home and why?"

Growing up vegetarian, my family meals put a large emphasis on tofu in all forms. Growing up, I ate tofu pan-seared and spiced, curried in coconut milk, crumbled with chopped green peppers as a breakfast scramble, and stuffed into whole wheat pitas. When I began working in the kitchen at the Maryland Food Co-op, I learned more about the politics, health, and production of tofu. In a Maker’s workshop last November, I learned the ways in which tofu could be made from raw materials. While cooking hot specials for the Co-op, we learned together how to make it stretch; through trial and experience, we learned how to make tofu dishes that were wholesome, tasty, protein-filled, nourishing. To me, tofu represents nourishment, but it also presents its history of production: unlike soybeans, tofu does not sprout from the ground as an edible product. Tofu requires hands to produce it, and arms to transport it, and therefore it carries its own politics. I also think about its versatility, and the may ways one can manipulate tofu to be nourishing and filling. Though many things in my life have changed since the years of my early childhood, tofu continues to remind me of home, while simultaneously reminding me how humans, too, can be versatile.

I recently got to visit the office of The Real News Network, and speak with former Black Panther Party member Eddie Conway; it truly was one of the most important moments in my activist life at the moment. Eddie told us his story; how he was left in prison for 44 years, spending his time organizing and educating himself from the inside, then was released and immediately continued his work; rejoining the movement and joining the Real News Network. I told him I was tired; that I knew I had not fought long enough to deserve the feeling, but there it was. I asked him, as an active radical organizer, how he stayed energized and hopeful. He looked at me, very matter of fact, and told me he spent the first 6 months out of prison volunteering with kids in South Baltimore, showing them how to grow food in the abandoned apartments and warehouses littering their neighborhoods, before joining the Real News Network and continuing his liberation work. “Once you get woke, you stay woke. You can’t forget; there’s no fallin’ asleep again.” Those are words that I strive to remember for the rest of my life. They remind me that this is a responsibility that we cannot abandon. You cannot just be woke; you have to stay that way.

Dominique and Dorian Blue will be attending CoFED's Summer Co-op Academy in July. Be sure to follow CoFED on Facebook and Twitter to get the latest on how their projects are coming along!