We're so excited to introduce you to Merelis, Jazmin, and avery, this year’s Racial Justice Fellows!

This year's Fellows, chosen from a competitive pool of 54 applicants across the U.S., embody the vision, values and spirit of our Racial Justice Fellowship, the only Fellowship out there specifically deepening the leadership of young folks of color as they work towards community-centered food systems, racial justice, and our collective liberation. These Fellows exist and create in ways that only they can, radical acts in a world where simply being oneself is a dangerous project. And with the courage to bring their communities with them, they infinitely expand the possibilities for a safe, sustainable, and socially just world. 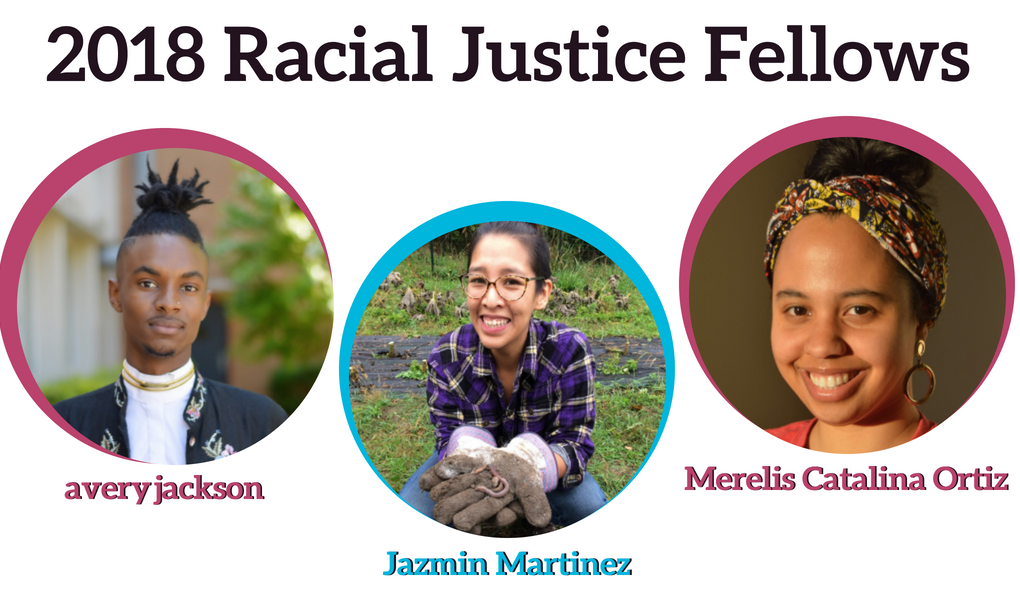 avery jackson (they/them) is a movement worker using community organizing, rest, research, and gatherings to future build. They hold a B.A. in Sociology from Morehouse College and join the legacy of unsung Gender Non-Conforming Morehouse graduates. With a research background in anti-Black state and economic violence, avery is committed to exploring alternative systems of economy and relationship and doing so by supporting the development of self-sustaining ventures using social enterprise with The Come Up Project's first program Gangstas to Growers. Their commitment to restorative justice, resistance, and truth is intersectional and varied. They have also worked with the Partnership for Southern Equity to bridge the gap between environmental justice and racial equity. As an organizer avery is currently working to protect Black communities from Atlanta’s spike in redevelopment, cultural extraction, and erasure through food and housing cooperatives with ATLisREADY. Rural land ownership, cultivation, and farming is in avery's afro-future. In short, they're just another organizer in a legacy of Black doers sacrificing their privileges for the collective future. For the fellowship, avery will maximize the impact of an existing co-op in Atlanta, the Gangstas to Growers workforce and personal development program. Gangstas to Growers helps move formerly incarcerated and system-involved young Black people into the urban agribusiness industry as an effort to reduce recidivism.

Jazmin Martinez (they/them) is a queer, gender non-conforming, immigrant living in La Villita, Chicago who comes from a lineage of Mexican campesinos. They are currently working on establishing Catatumbo Cooperative Farm along with two amazing co-creators Ireri Unzueta Carrasco and Vivi Moreno. Their background includes organizing with Organized Communities Against Deportations (OCAD), working with trauma survivors of domestic violence and sexual assault, providing support to folks living with HIV, and working with previously incarcerated folks. They also experienced intimate partner abuse which led to an ongoing healing process. Altogether, their current and past work in organizing, working with communities who are systematically marginalized and their own trauma shaped their path towards farming. As they continue on this farming journey, they are committed to creating connections between farming/cooperative work with broader social justice movements and healing to envision and create other possible worlds. For the fellowship, Jazmin will develop a bilingual research-based project that highlights the trajectory and process of their cooperative: where we are right now, how we got here, and where we want to go. An offering in one or more forms: guide, booklet, zine, or even love letter. These English and Spanish offerings would serve as educational tools and resources for those who are interested in starting a worker-owned cooperative based within food economies (specifically but not limited to community supported agriculture). This project is based on the Catatumbo Cooperative Farm which involves Ireri and Vivi and their work, their ideas, their commitment and their love.

Merelis Catalina Ortiz (she/her) is an Afro-Taina Dominican Black wombyn. She is a creative, organizer, chef, and former worker-owner of Woke Foods, a cooperative food business based in New York City. Woke Foods is influenced by the flavors of the Dominican Republic, using food as a tool to leverage political and spiritual power. Merelis is inspired by the resiliency of Black and Brown people. She was born and raised in New York City. Seeing her family with health conditions that were highly related to their lifestyle and environment created by a systematically oppressive society pushed Merelis to do organizing around food and social justice. Merelis recognizes the knowledge and strength that Black and Brown people hold and hopes to be a vessel that reminds her people of this wisdom. She is working towards her own healing, and the healing and building among all people of color by guiding spaces that are accessible in nature, through food, and storytelling. She is a proud Soul Fire Farm Black and Latinx Farmers Immersion alum! Merelis dreams to own land with community and grow her own food on her land. For the fellowship, Merelis will launch the Kelly Street Garden Food Solidarity Program. This program will take place at Kelly Street Community Garden, in the Bronx that provides food and community space to residents of primarily low-income housing. The program is a bilingual offering, an urban food program teaching basic gardening, cooperative principles and food-as-medicine to Black, Indigenous, and Latinx heritage people who live in New York City and are often left out from impactful programs that often take place away from the city.

CoFED's Racial Justice Fellows, avery, Jazmin, and Merelis, are a snapshot not only of the future of our community but also the future of the cooperative movement. We are incredibly humbled to support them in their work, and hope you all do the same!