Trust me, as an immigrant child of parents who idolized the “model minority” narrative, I didn’t expect to deeply resonate with social justice or cooperative models when I got to college. I even study pre-med (very traditional) at Evergreen State College (very non-traditional). But after joining the Flaming Eggplant Cafe - our campus’ only student food co-op - in Spring 2015, I can’t stop wishing everyone would be part of the cooperative movement. The Flaming Eggplant Cafe, or “The Eggplant” as our campus community calls it, is part of CoFED, a national network and training program that seeks to catalyze student food co-op development for racial and economic justice.

When I first got hired at The Eggplant to work front-of-house as a barista, server and cashier, I knew very little about cooperatives and collectives. Now I can say I’ve met Dr. Jessica Gordon-Nembhard, initiated Annual Reports as a member of the Outreach Committee, and fed a few of the inspirational farmworkers from Familias Unidas por la Justicia as part of the Catering and Events team. I can tell you that there is never a dull work assignment since sometimes many projects overlap with other positions!

There’s also fun events you get to attend. Last year, I had the pleasure of attending the 2016 NASCO Institute on Cooperative Resilience in Ann Arbor, Michigan (pictured at right). I learned a lot, and my experience pushed me to critically reflect on ways to make cooperative learning and work more accessible and palatable to communities aside from those that traditionally only have access to them through the privilege of being able to experience ‘alternative’ job situations such as a barista at a student-run collective cafe, facilitating group meetings or organizing for the organic farm. I had only been able to attend through the Low Income Scholarship.

Speaking from my own observations and experiences in various cooperative spaces and at The Flaming Eggplant Cafe, here are 10 things I’ve learned about co-ops and social justice:

1. Intentions Are Everything, But So Are Actions.

Intention versus impact is a hard rule to live by as it is more fluid than anything but in cooperative settings where work gets done solely through action, you start to realize there is no other truer idea.

Things get done through action, an idea may catalyse and inspire but action is always the real producer. Someone may say they mean to work on the Outreach binder but the real benefit is not the words but the finished product - something everyone can tangibly benefit from.

2. The Movement is Diverse.

No one model works the best. No collectivist idea works the best. One size does not fit all. Cooperatives are built to meet the needs of their community in whatever context they exist; some may have similar structures but they are inherently different because of their community, location, and values. For example, CECOSESOLA in Venezuela is a very large network of cooperatives with ferias, or markets, serving around 55,000 families. Their model has been copied in other countries but a key reason that they fail is simply a difference in culture. Same as with business models. It’s important that as individuals, we really value various perspectives and opinions as it breathes creative discussion and divergent thinking within these cooperative spaces - and creativity is the core of adaptability that sustains cooperatives and their work.

It’s important that as individuals, we really value various perspectives and opinions as it breathes creative discussion and divergent thinking within these cooperative spaces - and creativity is the core of adaptability that sustains cooperatives and their work.

It’s important to not have your ego develop an unhealthy possession over any work within a collective, nor does it mean letting others do all the work. Step back means you’ve come to a point where you can think critically about your positionality and know when you are needed and when you are not. For example, although I am the most experienced person on Outreach does not mean I have to facilitate or lead everything. The times I would’ve used my experience and knowledge would’ve hindered a new hire from gaining or practicing theirs.

It’s important that cooperatives foster environments where members feel free to speak up on whatever they want, though I’m noticing that there is too much focus on the emphasis of speaking out, but no real discussion on what happens after you’re heard. This starts to become the rocky territory on the problematic “freedom of speech” that often excuses problematic ideas. Freedom of speech doesn’t mean freedom from accountability or responsibility. Don’t be afraid to speak up, but you better make sure you know what you’re actually saying.

5. The Individual Struggle In The Collective Struggle.

I say this specifically for those of us living in the complicated multi-identity individualistic culture that is American culture: you will encounter moments when either you or an individual is at odds with the cooperative. There is no answer I can give but only that in this work you need to be prepared to pick and choose your battles and to think critically about yourself as an individual to this movement and what that means. To work cooperatively is inherently in opposition to Capitalism, as the system is built on the rampant hoarding of capital (most common is money) and endless privatization. With that said, if we through cooperative work challenged our ideas of private property, ownership, power, and autonomy in ourselves, our friends, our community, and our world - what would change?

At the last co-op conference I attended, a white man was in an anti-oppression workshop that I was in as well. The issue that was plaguing him and his co-op was the lack of diversity. How he couldn't figure out how to get more people of color, queer folks, Muslims and other marginalized identities in his housing cooperative. Maybe he didn't think that the space he held could’ve actually been for the people he wanted there. Maybe it really was as simple as literally just giving someone the spot - as white supremacy culture has always prioritized white people without a second thought. Maybe not giving, but projecting the idea that there was no problem or issue of them taking it in the first place - as white supremacy so effortlessly tells white people that they can see themselves in anything, truly anything.

Sometimes I see the forwarding of social justice as painting a picture. The white canvas can represent a world inherently built to be continued the way it is, shaped by discriminatory systems and maintained by problematic status quos. Sometimes in this work, we get written off as idealists who get burned out over our anxiety to build this perfect world, to see the final masterpiece in all its completion. In reality, each stroke is absolutely integral to the final piece, even if it will be covered or mixed by another stroke or color. Paintings are not simple colors with static methodologies, they are complicated and dynamic with layers upon layers of work done over time.

8. Movements are GLUTTONOUS with Time.

Movements are on their own schedule, even if people work so hard for them to happen now. This means movements will grow without you or me. Many folks at the conference talked about wanting the cooperative movement to grow but its already growing - case in point is you even thinking about it! The trees our ancestors planted are fed by us and with good care, the next generation will benefit from a bigger bounty of its fruits than we already have a small taste of. The beauty of student-run cafes is that there will always be students to feed and students who want to work at The Eggplant to feed them.

9. Every Person Matters in a Cooperative.

99 is not the same as 100. Capitalism would have you believe people are disposable but that’s simply not true. Everyone, with all the complex facets of their identity, has immeasurable capabilities that can be harnessed and challenged, deepening benefits of the work being done. The future will not be a homogenous tune; it will be of people contributing their own song and it will be a marvelous symphony.

Cooperatives have seriously changed what values are for me: both what my values are, how I reflect them, and what I even consider to be values. If the anti-oppression work we do is centered around making monetary-equity, how are we any different from the capitalists we challenge? Yes, it’s important to get paid but low-pay labor I’ve done at the cafe has also benefitted me in ways that can't be tracked by bookkeeping. Through working at the Cafe, I can see the educational, environmental, personal and community value it has that simply cannot be explained on paper or summarized with a financial report.

I never thought my work at the Eggplant would take me to where I am today in this movement. Although I’ve only been with The Flaming Eggplant Cafe for a year and a half, I’ve learned so much about cooperatives and the cooperative movement. 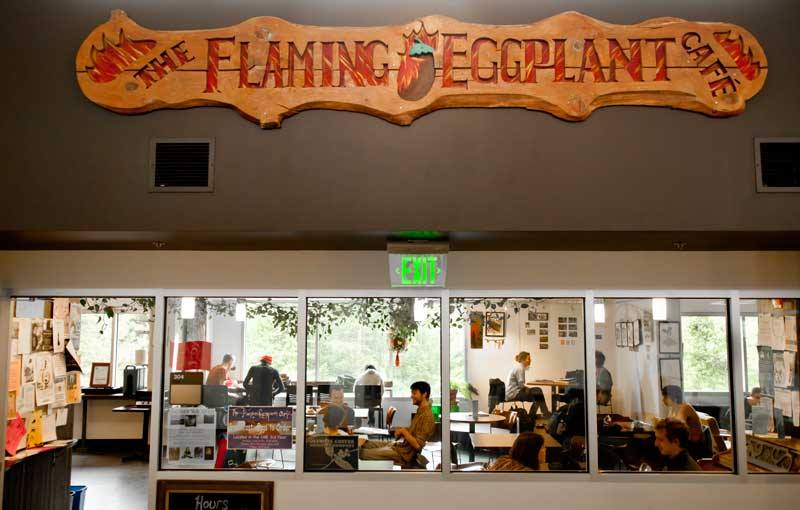 In a world and culture disconnected from nature and from each other, the cooperative model and framework is one of the truest forms of collaborative resistance and change.

What’s amazing about the world of cooperatives is that it is exceptionally simple, yet divergent and adaptable - qualities that are important in facilitating the actions and change we need in order to shape the equitable and sustainable world we want and deserve.

With all that said, connect with your local cooperative! Ask questions, and make sure to ask a lot. ;)

Note from CoFED: Members of the Flaming Eggplant Cafe have previously participated in CoFED's Summer Co-op Academy, which is accepting applications now through March 15, 2017. CoFED Summer Co-op Academy (SCA) is a cooperative business boot camp that promotes education for transformation and liberation. It is a week-long, life-changing experience where college students like you can learn more about decolonizing our food system and building student food co-ops with a triple bottom line of food sovereignty, sustainability and social justice.

Arianne Aquino is a senior at The Evergreen State College in Olympia, WA. Although Evergreen does not have majors, they are Pre-Med with an emphasis in Social Justice and Environmentalism. They are a worker-member of The Flaming Eggplant Cafe, a student-run food co-op. They previously worked as a Peer Advisor at their campus’s diversity and equity offices called the First Peoples Multicultural Services.